Snow and the Seasons. 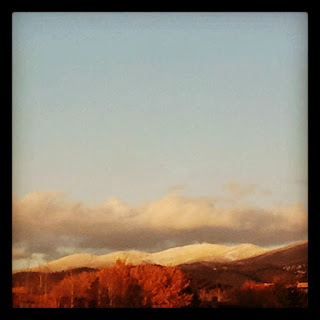 Winter came this weekend. When we woke up yesterday there was a different glow coming through the blinds. Snow. Okay, just an inch. But that still counts. That’s still snow. (And yep, that’s snow in ‘dem hills above.) Noah and I were the only ones up, so I took him over to the big bay window.
“Look Noah! Do you know what that is?”

Noah was born in Atlanta and lived most of his 2 years in California. Not exactly tundra. So, needless to say, he was confused by the white everywhere. He looked out and around, then up at me like I was playing some joke. When I didn’t laugh and make the ground come back into view, he looked back out, thought about it for a while, then turned and said, “that sand daddy?”

It was a pretty good guess, considering the evidence. And to a 2-year old, the idea of someone coming a dumping a bunch of white sand all over isn’t that much more outlandish than the truth. We opened the door, and I scooped up a bit for him to touch. He tentatively put a finger out and then recoiled like he had been bitten. “It’s okay,” I told him. “It’s just like cold rain.” He looked dubious, said “no daddy,” but then he went in for more, this time laughing.

As an aside (and this will only mean something to those who have read this here blog entry), it was only about 6am. The snow fell probably around 3 or 4. At least it hadn’t begun at midnight when we went to sleep. But what did I see in the driveway we share with our neighbor Mrs. Livingston? You guessed it. Tire tracks. They went about half way up and then ended, where the driver no doubt saw the fence and wooden sawhorses blocking his way, slammed his hands on the wheel, cursed and backed back out.

Ask me again in a few months, but right now I’m nearly as excited as my boys by the change of the seasons. For the past couple years, we existed in a state of semi-timelessness, violated only by the fact that our children were outgrowing their clothes and losing some of the baby fat in their faces.

I think of “awareness” as generally a good thing. There have been levels of awareness I missed in just about everywhere I lived. In NY, it was that there was any world beyond Manhattan. In Corsica, it was the same, oddly–maybe it’s an island thing? I think in California, it was our place in the orbit.

There are no doubt things I will miss here in Santa Fe, but for now, having come through the summer heat and afternoon thunder and through the aspen-quaking fall, and now feeling the beginnings of winter (what with the snow and the fact that the city workers have already started to string the plaza with Christmas lights [sic.]), I am just glad to feel it again–that we are racing around the sun, and that even the sun is racing around the galaxy, etc., and that everything changes as a result. The weather. Our moods. Our bodies (my hair, for example, has gone full on wild, and I’m starting to build up the blubber). It’s a good feeling, by and large. It doesn’t make me feel old, it makes me feel like part of it all, these changes–cyclical and linear–that have been happening forever are still happening and will happen after we’re gone. They’re happening to every inch of the world, even if we’re not always aware, and you and I are part of that world.