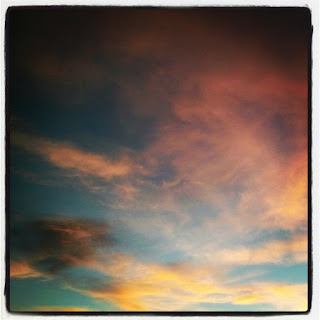 When Ohio went blue, and the election was called, I went into Jackson’s room and woke him up. “Hey buddy,” I whispered. “Buddy, Obama won. He won!” Jackson rarely wakes up when I come in late and kiss him goodnight, but last night he rolled over, opened his eyes and smiled so sweetly that I got tears in my eyes. He fell right back to sleep. I, of course, was up for the next four hours or so watching Karl Rove try to tell me that it wasn’t over, watching other results come in, listening to the commentary, the speeches (of which I thought Romney’s was full of grace and heart, and Obama’s was powerfully inspiring) and then just generally feeling relieved and proud. Not exactly elated. Mostly just relieved and proud.

Four years ago, I was elated. I was ecstatic. This time I’m more sober. These have been a hard four years for many. A lot of people have suffered. A lot of people are suffering right now. People I love dearly are still without power near where I grew up. Problems are big, and we’re still startlingly divided. I don’t think even Lincoln could have worked with this congress, and that congress remains intact. We need a number of big changes, campaign finance reform one of the biggest, I believe. And these big changes will be hard to come by.

But I also know that the world isn’t fair; that the powerful almost always take advantage of the less powerful; that society has dealt a cruel hand to so many for so long; that without restrictions, we exploit our resources and destroy our planet. I know that we are perpetually short-sighted as a people, that when it comes down to making decisions, we rarely (never?) make decisions in our longterm interest. We need government to help in these regards, to see the broad view, to invest in projects that may not be realized in our lifetimes, to protect the powerless from the powerful, hell even to protect the powerful from the powerful, to help guide us toward a healthy society and healthy world. We voted for such protection, and so I am most relieved.

Noah and I were on a walk on Monday and we passed a bench that he wanted to stop and sit on. (He also wanted me to lay out a picnic with “three foods, daddy?” Not sure why it’s always three foods he wants. I only had one, which did please him). The bench had a quote on it by Gandhi that hit me: 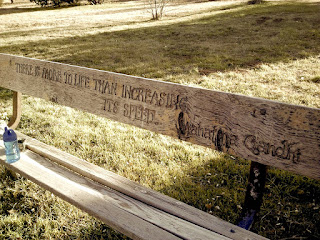 “There is more to life than increasing its speed.” I need to remember it more. Maybe we all do. And I think it relates to yesterday’s election. What do we value in life? Wealth? Success? Recognition? Is life some sort of race run as individuals, mano a mano? Or do we have a bigger sense of what matters in life, of what it means to be a society, to be a family, to love one another? I hope we have a bigger sense. I think the election results suggests as much.

When Jackson awoke this morning I asked him if he remembered what I told him when I woke him up. I wanted to make sure his reaction wasn’t just a dreamy one. “Of course, daddy. Obama won! He won!” Yep. He knew it. And so for Jackson and Noah, even more than me, I am relieved today, so proud and grateful to be an American.