"Berkeley has used his music to try and appeal to our common humanity and a hope that it still exists, somewhere."

I wrote and recorded these songs in the attic of a house in Newport, Rhode Island. My family took refuge in that house after making the hard decision to leave where we were living in Madrid when the pandemic got so bad in the city that they closed all the parks and declared that our children wouldn’t be allowed to leave our apartment. We couldn’t get back home to Santa Fe, though, and so we relied on the kindness of friends for housing, first in Newport and then in Taos.... Maybe the only thing people do less than listen to full records these days is read actual books. But I often have more to say about my songs. And writing stories offers a lot more real estate, allows for more elaborate details and far lengthier description than within the confines of a few minutes of tight rhyme scheme and rhythm. So I put my guitar down after returning from Corsica in 2010 and tried to type out the tales that led to the songs I wrote while there. 140 Goats and a Guitar is a memoir. It's very personal and confessional. The Free Brontosaurus came next. It's equally emotional and maybe just as personal, though it's fiction and so veiled behind a set of characters, each of whom has a song on Cardboard Boat. That book is a puzzle. You have to figure out which song goes with which character. And thus, I have invented a combination (book and record) that might just appeal to the smallest market subset imaginable. If you're in that subset, though, I think you're the coolest. 140 Goats and a Guitar Audiobook 140 Goats And A Guitar + Some Kind of Cure Bundle 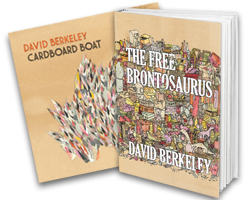