Halloween Sky. Taking a Ride with the Fellas. Trick-or-Treating Early. 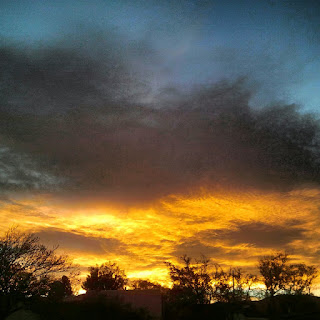 This morning’s sky was appropriate. Orange with haunting eyes. Halloween. A big deal in my household. Always was. I’m of the camp that as soon as the day dawns it’s fair game to knock on doors and ask for food. Sarah disagrees. She claims we have to wait until dark.

The boys were in great spirits today. Jackson chose from among the seven or eight costumes he had ready for the day. Noah dressed as a pirate in a hand-me-down outfit Sarah made a few years ago for Jackson. By the time I picked Noah up from school, however, he had accessorized the outfit with a pink and silver sequined skirt he found in his classroom.

I think it’s worth noting, in case you or your kid find yourselves in a similar situation, how substantial an effect such a small piece of material can have on an outfit. Really changes the whole look.

The highlight of my day so far, however, was when I was still en route to get Noah. I bike there, and soon after rounding my corner, I fell in among these fellas pictured below: 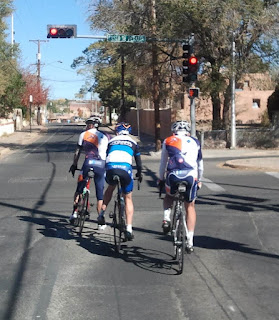 I always get a kick out of biking outfits, particularly on Halloween. So I hollered up at them, “looking good, gentlemen. Looking good.” I did kindly, but I’m sure there was a hint of sarcasm. Still I figured I was safe in assuming that they were serious cyclists, and that they’d stay well ahead of me. Well, wrong I was. Turned out the guys just had the look (and they sure did have the look), but they were going really slowly. I was late for pickup, and so I had no choice but to ride among them for a while.

I got great joy out of becoming, as it must have seem, the rebel on the team. There I was in my corduroys on my vintage brown cruiser of a bike, towing my kid trailer with it’s bright orange flag waiving above it. And I stayed right in one of the guy’s slipstreams, staring up at his spandexed ass, branded as it was with a variety of sponsor’s names. I waved to cars and passersby. And I tried momentarily to engage with the guys in their conversation. But they were talking about doing some 120 mile ride this weekend and discussing brands of pedals and a number of topics that I had no interest in. So I pretty much stayed silent, and then ultimately I blew by them with a wave. Off I sped to pick up my cross-dressing buccaneer of a son.

Soon I will get on the bike again and go get Jackson. And then, because Sarah is still working and so won’t be able to stop us from starting early, we intend to startle as many neighbors as possible, interrupting their soaps or whatever it is people do during the day at home, rapping on every decorated door we come upon and trying to secure the best pieces of candy for ourselves. All three of us.