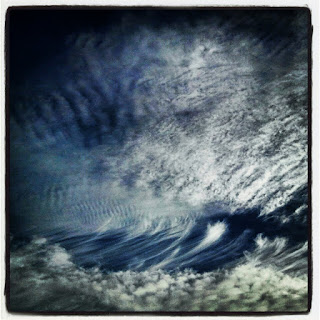 Today is my dad’s birthday. I am very glad he’s my father. He and my mom are in town, as tomorrow is also Jackson’s birthday. It’s nice having them here. Our kids adore them, and they adore our kids. They are troopers and have come out every month so far to visit. The kids miss living only a few miles away from their grandparents. We miss it too. Sometimes. Other times, we’re happy that the Mojave Desert, etc. etc., is in between.

Today is also the birthday of Bob Ross, may he rest in peace. For the amount I watched that man paint while growing up, you’d think I’d be more skilled in handling a number 4 fan brush. He made it look so easy, didn’t he? Been thinking a lot about what my dad, Jackson and Bob Ross have in common. I’m sure the question is on a lot of your minds as well these days…

This morning’s sky was spotted first by Jackson. He’s been waking up real early for the past few days, so excited about the prospect of turning six and the rumor that a new bike with hand brakes and gears is going to show up when that happens.

I was in a deep slumber when he hollered to me. I was in the middle of a strange dream where Sarah and I had been invited to a friend’s for dinner, and for some reason we brought our half-full Diaper Dekor with us (for those of you who don’t know what that is, enjoy the ignorance). I realized after we arrived that it wasn’t an appropriate or necessary thing to bring, and so I tried to hide it behind my back as we said hello and then attempted to stow it in our host’s nursery, placing it right beside her’s and hoping she wouldn’t notice. Anyway, right as I was sneaking out of the nursery, I heard “Daddy, get in here, get in here, you got to get a picture of this sky. Hurry. Grab your phone. Come on. Come on.” It was a good way to wake up, and it saved me from getting caught with a bin of dirty diapers.

Before I went to sleep last night, I saw “Searching for Sugar Man” in am awesome little art house/gallery nearby. It’s an amazing film for so many reasons, at least one relevant to this here blog. It’s the story of a Detroit singer from the late 60s-early 70s named Rodriguez, who sounded a lot like Donovan but sang political and very lyrical songs more like Dylan. He released 2 albums that did nothing commercially, was dropped by his label and then gave up music and became a demolition/renovation worker. Unbeknownst to him, his music spoke to the anti-establishment/anti-apartheid movement in South Africa and through a lot of word-of-mouth and bootlegging, he became a sensation there. Bigger than the Rolling Stones. The movie describes how two South African fans/music-lovers tried to find out more about his rumored dramatic onstage suicide and more about his life and art. I won’t reveal any more. But here’s a handful of reasons why you should see it:
1) the music is great
2) it’s funny
3) it’s super moving (my aforementioned dad cried)
4)* there are unbelievable shots of the sky in South Africa and Detroit
5) it’s a great sermon on the music industry and the arbitrariness of success, combined with a deep questioning about whether that success is desirable or relevant to the true artist.

*this is primary reason it’s relevant to the blog