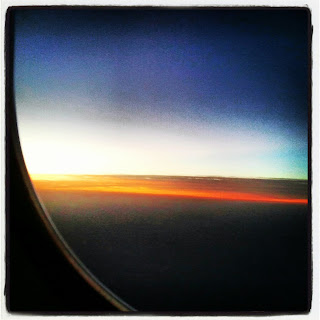 So the sun rises over New Mexico at about 6:30. And through the window of my Delta flight, it looked great. Course, I was on the road well before, at 4:15 to be precise, so that I could make my 6 o’clock flight out of Albuquerque to get to my show this evening outside DC. The sun was definitely not up then. I did my best to keep my sleepy focus during the hour-long drive with barely a car on the highway and the land to the right and left just as dark as (if not darker than) the black sky.

The overnight NPR program was on a pre-Halloween kick, and so at some point the theme song from the Exorcist came on, as did a creepy Sufjan Stevens tune. The DJ also spun the 20-minute epic Genesis tune, “Supper’s Ready.” It’s a real high point for Peter Gabriel, and it was a high point for me. In the more psychedelic moments, I could easily have drifted off into another dimension, losing sight of what was up and what was down. But I kept my wits about me. I have to. I’m a father.

We live on a sleepy jug handle of a street with barely a car on it. Behind our house is a lane that is perhaps less traveled, connecting as it does between two other back roads. Our driveway, which we share with a 90+-year-old lady named Mrs. Livingston connects the jug handle our mailbox is on with the little road behind. Apparently, before we moved in, Mrs. Livingston decided to put a big strong gate up on the back end of the driveway to prevent, or so we were told, people from using the driveway as a “thoroughfare” and tearing between our houses from one street to the other. Our eyebrows raised upon hearing that logic, and the story never made a whole lot of sense to us. A) Why would anyone on Earth need to cut between our two streets, and B) How would anyone have even discovered that the driveway went through, and C) If someone did find out, would they then spread the word? Would it be on Google Maps?

That being said, as a common pedestrian, it would in fact be very handy to be able to walk out onto the road behind our house. Especially with the kids, it makes the route to the market or the bakery almost a ½ mile shorter. So I’ve been trying to figure out how to tactfully bring the subject up with our neighbor, having been forewarned that this is a bit of a crusade for her and that if I ask her for a key to the many padlocks and chains at the wrong moment, she might go pale and drop down dead in my arms.

So, to stay on point, ass I lay in bed last night (for the few hours I was able to lay in bed before my alarm rudely roused me), I was thinking about our gate situation and the total absurdity of our little driveway having ever been used as a connector. I got myself all worked up and so resolved to talk to Mrs. Livingston at my first opportunity. I thought I had come up with an approach that might work. It would begin with my gentle and non-threatening tap on her front door, flanked by both my adorable boys, a plate of homemade baked goods in hand… I was working through possible opening lines as I tiptoed to the front of our dark house, away from my sleeping family, to get dressed to leave.

You may be wondering why I’m telling you all this? Well, as I stood there, naked as the night is long, not concerned in the least about anyone seeing me through the glass doors leading out to the driveway, as I stood there trying to put on my socks at 4 in the bloody morning, as I stood there thinking about how to ask our old neighbor for a copy of a little key, right then and there, like two arrows flung from Aretemis’s bow, there came, I swear to you, two high beam headlights. They hit Mrs. Livingston’s house first. Then they continued to sweep around and found me, standing there naked, frozen and confused. Then they spun down the length of our house. And then, to my blinking amazement, the car charged into our driveway, made it about 30 feet down, until the phantom driver caught sight of the chain linked fence, slammed on the brakes (and I imagine also slapped both hands hard on the steering wheel), threw it into reverse, backed on out, and screeched away into the still black night.

I finished getting dressed in baffled silence. Did this happen most mornings at 4? Unsure what to do or say, I got into my car and headed to the airport. That shortcut-seeking ghost white Jetta was the only car I saw on any road (interstate or driveway) for almost 30 minutes. Somewhere in the middle of the Genesis tune, I gave up forever on approaching Mrs. Livingston about getting a key to the back gate. And until I saw that beautiful sunrise out the window of 11E, I had instead resolved to propose that we build a similar gate at the front end of our drive.