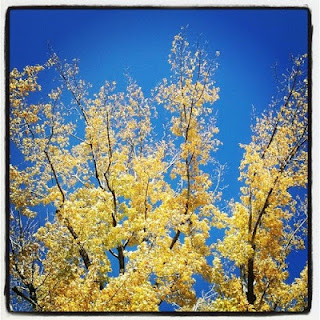 Took this laying on some guy’s over-watered lawn here in town. I figure if he’s going to use all that water, he should let me lie on it. That’s what I would have said, too, had he shown up. But he didn’t. Thank god. Really nice looking tree, nonetheless.

Was going to write about the fall, about how much I missed it living in California, even though I didn’t realize it at the time. I didn’t feel it fair to complain about the lack of seasons in a place where it’s always between 50 and 70 degrees. So most of the time I romanticized the fog and relished getting to jog in January. All that is true and good, but now that it’s here in full, I realize that I was missing fall big time.

But I’m not really in the mood to write about all that at the moment because, well, because I feel pretty good after watching that debate. (Sarah said it sounded like my NY football Giants were playing based on some my reactions.) So instead of trying to wax poetic about something we all know is great (even if I didn’t openly lament its absence at the time), I’m just going to go out in the autumn air and drink a toast to hope. Maybe I’ll even walk over to this tree and spill a little beer on that guy’s lawn.
Chin Up,
David