What would Odysseus Do? 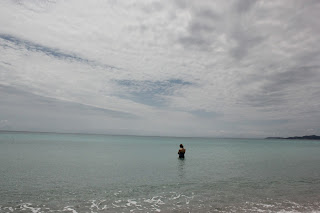 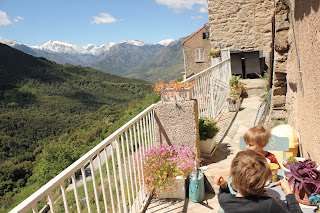 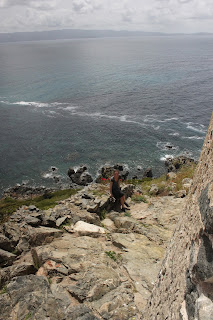 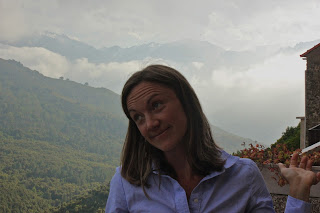 It’s been a summer of returns. We’ve just come back from Corsica. See above. We left Santa Fe a month ago, first for NY, to Sarah’s childhood home. See below. 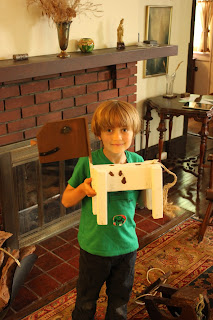 (That’s a horse Jackson made with his grandpa. Oddly, that horse kind of resembles the boy, no?)

Then we went back to Tralonca (more on that in a minute). 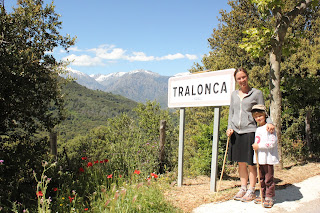 Then back to NY where I took the boys to see our origins.

And now we’re back in Berkeley, where we will stay for most of the summer. We’ve swapped our Santa Fe house for a house off Shattuck that appears to have been inhabited at one point recently by elves and faeries. 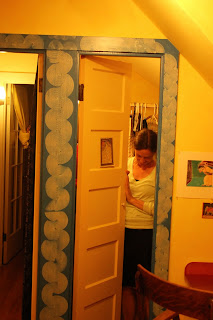 Sarah is learning ancient Greek at Cal so she can teach it in the fall (sic.). That’s why we’re here. Out of sympathy for her endeavor, I intend to eat a lot of gyros.

Speaking of gyros, here’s a long aside: I see the gyros not only as one of the more delicious handheld meals currently available, but also the holy grail of pronunciation. I’m constantly searching for the proper way to say it. Once my brother did the unthinkable and actually asked the shawarma jerk (probably not his official title). He said something that sounded like the currency in the EU.
“Well then one euro,” my brother promptly requested. He felt pretty good for about a minute until the Greek behind the counter shouted back into the kitchen something with a hard g and a final s.

Thus I keep trying, intoning it differently every time and hoping that one time I’ll nail it. So you can probably imagine my euphoria when in Austin recently, I barked out, “one yeero,” and the ancient at the register, who looked remarkably like Odysseus, eyed me up and down thoroughly, and then leaned over the counter and asked (in a whisper, with two rolled r’s), “are you Greek?”
“Yes I am,” I said proudly, if a little too loud. “Yes I am.”
But then, as he was taking the warm pita off the grill, I asked for the tzatziki sauce and the hot sauce in there. I saw his back stiffen, his head tilt back. He dropped the knife. He turned slowly toward me. His left eyebrow was arched, and he glared at me.
“You’re not Greek,” he snarled.
I blushed. “Well, I’m from…”
He cut me off. “No Greek takes yoghurt sauce and tomato sauce.” And with that, he slammed the sandwich into my hand and said dismissively, “here’s your high-ro.”

It seems, you’re either Greek or your not. You might fool them for a little while, but sooner or later, they’ll find you out. And if you’re not Greek, it doesn’t matter how you pronounce “gryos,” it’s not going to be right.

That’s more or less how I felt upon leaving Corsica the first time (my feeble attempt at making that aside relevant). You’re either Corsican or your not. But this time, we were welcomed with big open arms and lots of kisses on both cheeks. No doubt this had at least a bit to do with the fact that everyone knew we were only there for a visit and not to stay. Still, people couldn’t have been nicer. In fact, for better and worse, the family from whom we rented our place when we lived there had us stay in their house with them for our whole visit. This was incredibly kind and generous, as any of you who know my kids and can imagine what kind of multi-day house guests they’d be can attest. It also meant that French was what we spoke from petit dejeuner until the final digestif in the wee hours.

It’s been four years since we were last there. We look a little different. I grew a mustache for some reason. (Speaking of, I’ve coined a new related phrase. Here’s how it’s used: If someone is making an unnecessarily big deal of something, and you want them to lighten up, you now can and should say, “ah, grow a stache”). Sarah got the PhD and a job. I put out a couple more records (speaking of, the new one comes out on vinyl July 9th). We’ve moved a bunch of times, of course. Jackson was just a baby when were there last time. He spent so much of those days on my back in a pack. I can’t carry him in that pack anymore. We didn’t let him out of our sight in our village when we were there originally for fear he’d tumble off the side of the mountain. This time, we let him roam freely through the little cobblestone alleys and tunnels or out along the coastal trails. See below. 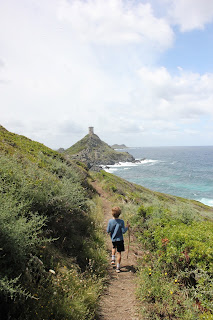 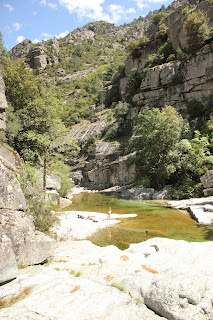 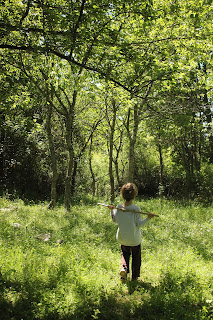 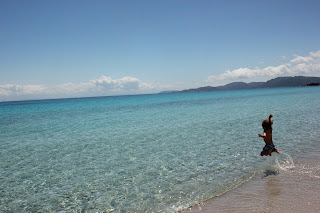 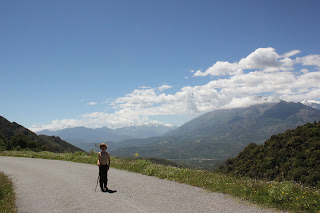 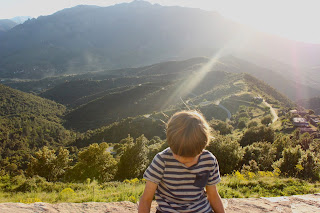 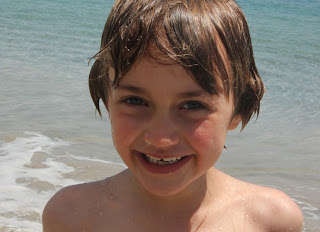 And hell, Noah wasn’t even a concept when we were last there, except as a near-daily suggestion from all the old Corsican ladies. Oddly, Noah is now about the same age Jackson was when we last left. He’s a very different boy than Jackson, of course. Still he gravitated to some of the same nooks, even intuitively got into some to the exact same poses. 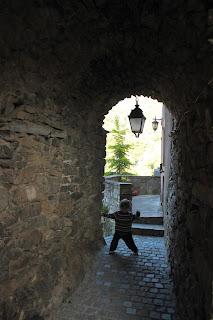 I’m pretty sure we have the same picture of Jackson in the same spot (maybe even in that same sweater). 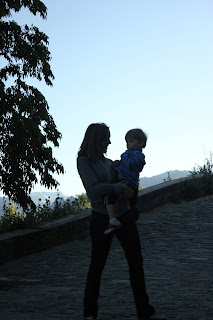 And we definitely have a pic of Sarah in the same spot in the same pose holding a different boy.

Here’s some more of Noah, for he’s painfully cute, even if he chose to roar like a lion whenever anyone said bonjour. In the last one on the beach below, you can see Calvi in the distance. Calvi is Noah’s middle name. There is a sign when you approach Calvi touting it as the home of Christopher Columbus. This is a dubious historical fact. The sign also claims that Calvi was Columbus’ middle name. This also is likely false. But we like to think that there are just 2 people in the world with Calvi as their middle name. Noah and old CC, or CCC as we like to call him. 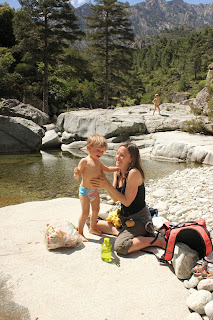 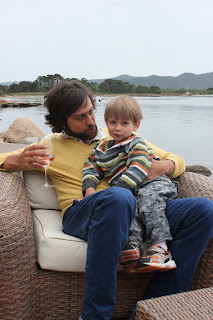 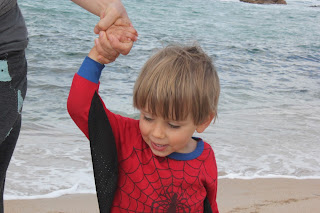 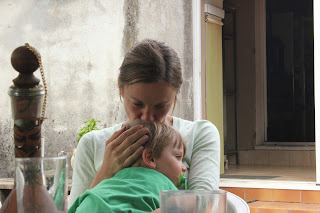 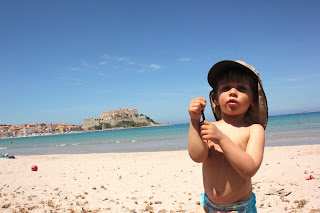 There were some changes on the island. The Tour du France is coming to Corsica for the first time in its 100 year history, so the island is getting a bit of a makeover. And they were burying the electricity lines in our village, not a small task considering the tiny passageways and the fact that the villagers are constantly inviting the workers in for coffee or gossiping with them. But for the most part, many of our favorite spots, the trails through the mountains, the sea, the rivers seem virtually unchanged.

So I was faced with the odd question of whether to re-take pictures. If you go back somewhere you’ve been, and you see something you’ve already photographed, do you take the picture again? Sure, if the light is perfect, or if a child, now more grown, is standing in the frame (or if it’s a different child now), you always take the shot. But what if it’s a landscape? A village, a coastline, a rock formation? What if you know you already have the shot, maybe many of the shot? Do you take it again? What would Odysseus do? That’s the question. (It’s also a t-shirt I think I might have made.) How can you resist? You’re moved by something again, you want to capture it and preserve it. In theory, that’s what you did the first time. Still you want to re-remember. You feel different. You look different, so the experience is different, even if the subject looks strikingly similar. Somehow the first photograph didn’t preserve it enough, didn’t hold it actively in your memory. So you need to take it again.

And, as the above can indicate, I did. Still I paused. It seemed strange. Returns are strange. You measure your progression, your life changes, your growth, your decline, against something that appears to be progressing far more slowly. We’re back in Berkeley now. Yesterday was Sarah’s first ancient Greek class (and my first gyros in quite some time), and ironically the first friend we saw over the weekend is named Penelope. Yeah, it’s only been a year since we saw her last, but still.

The fog was thick this morning. I remember mornings like these. You think it will rain. But it doesn’t rain. And now the sun is out. It used to happen like that, too.