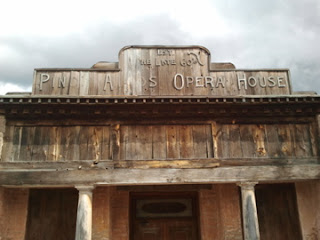 A quick one today for the road back from the Gila Wilderness was a long one, and I need to work on other things. But while it’s fresh in my head, I wanted to sound a virtual trumpet call in praise of the venue I played at this weekend: The Buckhorn Saloon and Opera House, chef/owner Thomas Bock, Melanie and Jeff who run the concert series down there, and the good people of Pinos Altos.

Here’s how the road looks that leads you there. 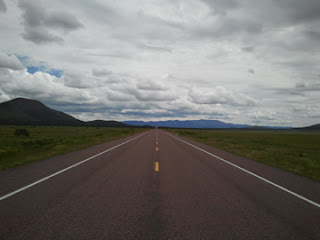 And here’s what it looks off to the side of that road. 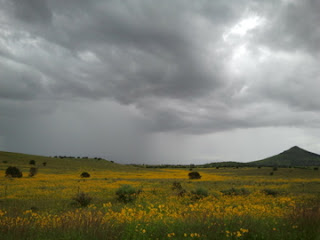 Yep. That’s rain you’re looking at out there.

Pinos Altos is a community of 500 in southern New Mexico. The nearest airport is like 3 1/2 hours away. And that’s in El Paso. Mexico is closer. It’s powerfully beautiful there. Almost painfully so. Particularly now, as the rains have been coming, and the hills are green and inviting. This is rattlesnake country. Arrowhead country. There used to be a lot of buffalo near here, I’m sure. There’s electricity now. There are cars. Some pavement. But the smells are the same. In the morning, it’s all mint and sage. There are hot springs nearby. It’s healing just to breath down there. And there’s a bus that goes around and picks folks up at their homes and takes them out. It’ll take them home, too. That’s pretty sweet.

We came in from a show the night before in Albuquerque. That’s a community of 400,000. There are all sorts of amenities and restaurants and venues there, but it’s hard to find a room to play music in where people actually listen. So hopes weren’t high after driving 4 hours and seeing more telescopes than other cars (see pic below–that’s the Very Large Array) 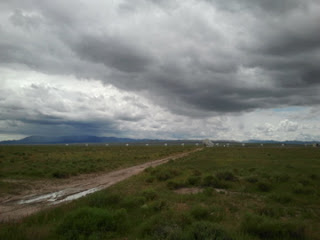 that the show at the Opera House was going to be worth leaving the family for. But see this is a rich and varied country, and there are pockets of beauty hidden all over it. Pinos Altos is definitely one of them. Look, relatively speaking, this was a small show. But numbers aren’t all that matter. This is a special spot. The venue is a reconstructed opera house that looks like it’s been around for a couple hundred years. There are old balconies where a president could have been assassinated in. There’s a bar next door that is the same slab of wood Billy the Kid leaned over and sucked down whatever kind of strong liquor he liked to drink. 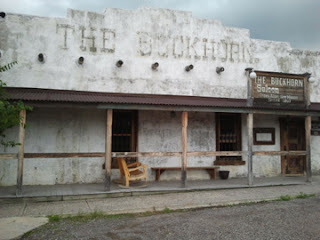 When I enter a space like that, I know pretty quickly that it’s going to be a cool show, that I’m going to give every bit of what I have inside. I also know that however tired I might be, the show will energize me. And wherever that energy comes from, it’s going to go through me and right out to the audience. I know that Bill (my guitarist) feels the same way. I can tell from the moment he touched his strings. Jordan may not feel that way. But he wasn’t with us on this run.

But it’s not just the room that makes this place a gem. Most people don’t have a venue like that at their disposal. That’s okay, though, for the space and the surroundings are only part of what makes a special and memorable show. In Pinos Altos, the owner is an amazing chef named Thomas Bock who moved out from San Francisco and turned the place into a world class restaurant. He trained the whole staff, taught them how to operate a fine dining establishment. That whole staff is still with him. They’re fiercely loyal. You feel that love when you walk into the place. When I walked through the door, he pulled me into the kitchen to let me taste his green chile stew. It was incredible. I like that. One time, when I played at the great Zingerman’s in Ann Arbor, I got to participate in the tasting Ari (the owner) was doing of all the new month’s dishes for his staff. That was years ago. I still rememeber it. Stuff like that makes me want to sing a little sweeter.

So here’s two big points for Pinos and a lesson to some other venues. When at all possible, feed and house your musicians. Treat them like family. That’s how they do it in Europe. That’s how they do it in small town New Mexico. I know that that’s not always possible. If you run a venue in a big city and lots of bands play nightly, you can’t feed and house them all. You’ll be in business for like 2 weeks before you run out of money. But then figure out how to make your artists feel welcome in other ways. My dear friend Ellen Porter who used to run the great Fez in New York City couldn’t spring for hotels. Still, she’ll always be my model for how to run a venue. A musician couldn’t have felt more welcomed than with her. She made each of them feel like he/she was her favorite artist, that she valued their art, that she was grateful they were there. And she did everything in her power to make sure the audience felt that too and let them know it. She’d throw someone out of the crowd for being disrespectful. Love that lady. Eddie Owen is like that, too. What a man.

Here’s the other thing about Pinos Altos. The people are grateful that bands have come to play. They are thankful. They mean it. They show it. This makes a difference to a musician, regardless of how big the audience is he or she is used to playing for. This gratitude is harder to ask in big cities where everyone and his therapist comes through with a band and its easy to get complacent and spoiled. But regardless of how off the beaten track the venue is, when people get up on a stage and bare their soul in any shape or form, it’s something worth respect and appreciation. The owner/promoter of a venue can set that tone, can remind an audience of that. The best ones do.

Obviously there are a whole host of venues and promoters who do this routinely for us and other musicians who pass through. And I’m grateful for each and every one. If you weren’t out there, I wouldn’t still be doing this. The Buckhorn Saloon and Opera House, though, definitely made my growing list of venues I dig and am glad exist. And when I think about what it takes to build a music scene in a town, which is something I think about a lot, it’s nice to remember spots like Pinos Altos. You don’t need to be a big city to make something special happen.
Chin up,
David