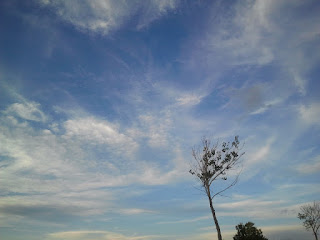 So we’ve got some procedural matters to resolve first. I’m on day 12 of my #100skies series, but only day 2 of this here blog. Ideally I’d like to be on the same page, and I’m not sure quite how to reconcile. Added to the dilemma is that I’ve been informed that I seem to have inadvertently skipped Day 6 and Day 10 of the instagram series. As I work toward somehow slowing down the daily pictures and speeding up the daily blog, I’m also considering how to sneak in a Day 6 and 10 without creating some other problem that will require a future solution.

When my younger brother Ben (who just got married, by the way) and I were younger we used to think that over time our 5 year age difference would ultimately vanish, that he would catch up. That sort of has proved true, though not if you consult our licenses (and while we’re on that sweet topic, take a look at that sharp mustached picture of me from my new New Mexico license. It’s my Avatar above). Point is that if I do nothing, though there may at times appear to be a synthesis, chances are pretty good that the pics are going to stay 10 days ahead of this here blog.

Solutions are welcomed, just make think through all ramifications first and be thorough in your presentation.

On to the pic of the day. A tree beside a soccer field where Jackson’s under 6-league had practice. To get this pic, I had to lay on the grass uncomfortably close to a couple other parents. I haven’t met any of these parents before as I’ve been away on tour for Jackson’s previous games and practices. Sometimes I’m in the mood to be social. I wasn’t this time. So I said nothing, and they said nothing. I snapped the shot, got up and brushed myself off and then hustled onto the field to grab Noah who had decided to wander out there and pick up all the orange cones that the coach had just placed for the next drill.

Over the next 20 minutes or so, I took maybe 30 more pictures. None of my kid. Well maybe one of my kid. They were of the sky. See the practice fields are about 20 minutes out of town, something I found to be a real pain in the ass until I arrived and saw how they are sited (only using that word because I tried it pretty successfully at the post office earlier). They are perched on a plateau, surrounded by cactus and sagebrush. And in every direction there really isn’t a whole lot but sky.

I think back to soccer practices when I was little. The memories are good ones. Well, at least pre-2nd grade. In 2nd grade I put on about 20 pounds. After that I wasn’t exactly the fleet-footed left winger I had been. But that aside, there was that sweet smell of cut grass. There’s the shortening days. There’s that cold sweat on the skin against the orange practice pinnies. There was the feel of adrenaline and control,the ball on the foot, your legs strong and steady, the burst into open field.

Jackson may as well be playing on some irrigated patch of the moon. It may or may not make any difference ultimately to him. I think the memories of the game probably are and should be stronger than the impressions of the landscape, at least for a while. Still the difference is profound.

Anyway, back to the point. There I was snapping pic after pic of what must have appeared to the other parents to be a whole lot of nothing. I’m not using a big fancy camera. Were I, that might have explained it. “Oh, he’s a photographer,” they might have said. “Oh that guy is a spy.” But no. They didn’t say any of that because I’m just using my phone.

I didn’t help them much either. “Taking pictures of the sky,” I mumbled at one point to one of the more suspicious dads. He didn’t respond.

When practice ended, we packed back into the car. The sun was setting then, and the sky went crazy. I pulled over (almost got clipped by that other father’s car). To get the shot I wanted, I had to climb up onto the roof of the car. So there I was, all of Jackson’s teammates driving by honking. And I’m up there, standing atop our Prius like a fool, holding my phone steady to try to take the perfect shot. 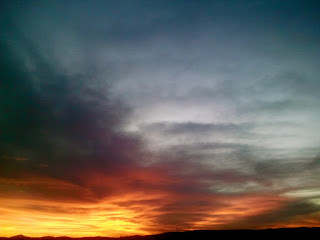