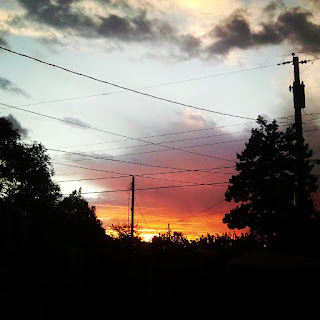 #100skies. Day 1.
We have arrived in New Mexico. The latest pearl on a string of moves that has led me from New Jersey through Boston, Idaho, Brooklyn, Atlanta, Brooklyn again, Corsica, Atlanta again, California and now Santa Fe. The change from the redwoods and fog of Northern California to the pinks and browns of Northern New Mexico has been a dramatic one. Much is new in our life here.

For one, there isn’t any water. Not in the air. And not on the ground. You feel the dryness immediately. I have just finished reading Moby Dick. It shook my world in so many ways. In fact, I could probably do a Moby Dick blog and be busy for a year. Melville begins with a stunning passage about how we all seek out water, wherever we are, perhaps literally setting sail or just craning our necks for a view of the sea. The vast majority of our bodies and our earth, of course, is water. So there is something somewhat panic-inducing about its scarcity here. Green is not the natural color here, and it takes a while to readjust your palette.

The oxygen is thin here as well. We are the highest state capital in the country. More than a thousand miles higher than Denver. The lungs take some time to adjust as well.

Leave the city limits, and there is suddenly nothing. That is the wrong word. There is everything, but nothing that has to do with man. There are canyons and arroyos and cactus and coyote and sage and lavender. But there are no houses anymore. There are no suburbs. There is space. Lots and lots of dry space. I am from the northeast. The emptiness takes adjustment, too.

My boy Jackson has entered kindergarten. He isn’t allowed to wear patterns to school, and his shirt must have a collar. He looks so grown up going through that gate. I am very proud of him. But the pride is mixed with sadness and some disbelief. How he could have gotten so old in my arms?

Noah, too, has started school, albeit preschool. We get there by bike, he on a seat just behind mine. He tells me which way to go. Then we chain the bike to a post, I lift him down, and he carries his own little lunchbox and puts it away in the class refrigerator. He too seems much the little man now as well. An astonishing development.

And Sarah has begun teaching at St John’s, where they teach the Great Books. She ultimately will teach all of them, and that means the foundational books in science and math, as well as philosophy and literature. Many of these she has yet to read. So she is working pretty hard and is around far less than we’re used to.

But more than all of these changes, the greatest change I feel here in New Mexico is the sky. I have lived for a season in in the Big Sky state of Montana. I have lived for a couple months in Alaska. I’ve lived in a little mountain village with barely any lights on the island of Corsica. But I have never seen skies like the skies here in New Mexico.

I don’t exactly understand the reason. We are high up, as I mentioned. That is surely part of it. There is very little light pollution. That no doubt helps. There are great breezes that perhaps blow the dust away. But that doesn’t explain fully the vastness, the clarity of light, the depth to the blue, the unbroken expanse. Perhaps part has to do with the lack of water. There is no blue on the ground. It is all in the sky. It takes the role of air and water. And the contrast is profound.

In a sky like this, the clouds become a presence in our daily life. They take on character. They cast great moving shadows on the land. They add dimension. They bring distinction to one section or other of the sky. Often the clouds form over the Sangre de Cristos. We’ll notice a silvery edge begin to appear above the ridgeline. Soon a massive thunderhead will appear. Against the blue, it is whiter than a dream. 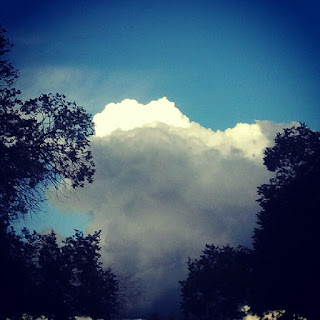 Storms come. And they are welcome, lightning and all. If it rains, we chase that rain. “Let it come down,” we yell. But these storms rarely occupy the whole sky. Nothing can occupy the whole sky here. It is too big. We are too small. We can see the storm in one corner or another. We can watch it chart a course. We can see it pass. The sky remains.

So I’ve been mesmerized and distracted by the big blue. It’s been a good distraction. I am also distracted by technology. There are a lot of things I worry about as a father. Cell phones are perhaps number one or two. Texting while driving, of course. But maybe more than that, I don’t like what we’re becoming as a people. This isn’t a new thought, and I’m at times as guilty as anyone. But we are tethered to our phones. Hunched over at all times. There is a new posture we now adopt. It seems we may evolve to have a bent back, a downturned head, an elbow joint fixed at 90 degrees. Somehow we now need to be texting or talking at all times. Why? We walk through the world oblivious to those around us. Think of the connections missed by our new “connectedness.” Our kids see us. They learn that what is in that phone, what is on the screen, is more interesting than what is beside us or in front of us, or above us. And as we develop more and more of the open spaces in the world, perhaps that will become more and more true. Virtual beauty will eclipse natural beauty.

Perhaps that is one reason I play music. To create something of beauty. I haven’t really thought of this before, but I think I write music with the aim of opening up my listeners (small number though that may be) to beauty, the beauty of the world, of people in the world. That is the way I attempt to affect change, not directly through articulating a cause or defending a movement but by reminding myself and those who hear me of beauty—that maybe through that heightened awareness of the beautiful, and of course I mean it in the deepest sense, we might treat each other and our world a little better.

So this #100skies series is my attempt to consider and document one of the most beautiful features of my new world, to do that daily. And in the process, I hope to remind myself and my boys, and perhaps anyone who stops by to visit, to look up, that having our heads in the skies is actually something to strive for.