Of late this here blog has become more about my mishaps around the house and the yard than about the sky or, hey here’s an idea, music. And in fact this past week could warrant a lengthy post on the same. I removed a pyracantha bush last week (also known as, I learned later, the fire bush). I felt a prick through the glove, but I figured it was nothing. Wrong. For in the subsequent days, the tip of the ring finger on the right hand went from my normal lovely shade of wild roses to the color of a hammerhead shark. And the finger got cold, maybe like that same shark. Super freaky. Were it not for the fact that my hero did quite well with 9 fingers, I’d have been pretty frightened.

But as the perceptive among you might have assumed from the lead of this blog, I’m not here to tell you about all that (though I do think I’m going to get to keep the finger). I’m here to talk momentarily about music. More to the point, I’m here to announce that I’ve launched a Kickstarter Campaign to fund my new project: my new book (a novella of ten intertwining stories) and my new album (ten songs that accompany the aforementioned ten stories). I’ve got all sorts of goods to give you if you donate including private concerts and personal songs written. But I also will give you my gratitude. Lots of it. And I fear I’ll be saying this frequently, but I really mean it: It’s just as important (maybe even more important) to tell your friends about what I’m trying to do than it is to give. So please don’t feel pressure to give money. You can support me by spreading the word.

Fan-funding is all the rage nowadays, and it works best when projects get talked about. That’s why I chose to do this through a public platform (Kickstarter) instead of just on my website like I did once before. It’s easier to share it and spread it. And I hope you will.

Truth be told, though, funding a record like this is a mixed bag for me. If we lived in a state kinder to its artists, I don’t think this would be the go-to method of raising money. But hey, at least we’re good to our mega-farmers. I feel guilty asking for donations to a cause which, though I obviously believe in deeply, I do not see as more deserving of your money than so many charities. I think I make this point pretty strongly in my Kickstarter Video, by the way. That said, I don’t think I’m taking the money that otherwise would have gone to a needier cause. (God, I hope I’m not.) And when I asked for money to fund the recording and release of Some Kind of Cure, it turned out to be a brilliant experience. And not just because I didn’t have to work as hard to pay back the costs. It was great because writing and recording songs is a lonely process. And dreaming up a big project like the one I’m embarking on can be daunting. There’s something about sharing the bones of the vision with you now, before the release, something about putting it out there on the table and proclaiming that that brings me and what I’m doing out of the shadows. It buoys me. It inspires me. Whether or not you give, I feel this collective push toward making the project happen. I also feel responsible to you. And in this case at least, that responsibility feels good. It reminds me that there are people out there who want this book and record to happen. It inspires me to make it even better than I might otherwise. So thanks for that.

You give me reason to keep my chin up,
David 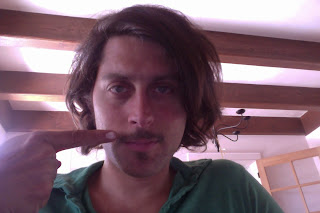 P.S. As an added incentive to encourage some early donations, I grew this fairly unattractive slug of a mustache, which I will keep until we reach half our goal. Sarah is ready to donate half herself, but I’d prefer it not come from our joint bank account…