A Family of Musicians Probably not the most representative shot from where I’ve been, still telling its own right. I’ve been in Toronto for this thing called the Folk Alliance—four days of music and panels on music in a downtown hotel. We were in a musical bubble. But outside that bubble, it’s all hockey up there, even in the urinals.

I’m flying home now. Back to Santa Fe. The country out the window is still flat and orderly. It’s still somewhat green. Or as green as the fields in middle America can be in late February. There’s water here. That’s about to change, though. The Earth below me will soon explode into canyons and mesas. The ground will rip apart or be thrust unnaturally upward. The green will go. Red and brown will replace it. And then I’ll know I’m close to home.

For the better part of the week, I’ve been playing and listening to others play songs or recite spoken word poetry. I hadn’t actually been eager to go. If I’m honest, I remember it as a bit of a schmooze fest and somewhat disingenuous, as all of us folk musicians who claim to care not for commercial success pine and paw for the attention of the few folk DJs, small labels and promoters who attend. I also am not really part of the scene. I have come to house concerts later than many of my peers, and I’ve never paid my dues around the campfires at Kerrville and the like.

Still I know and respect so many people who go, people who I rarely get to hear perform, as we’re often a day ahead or behind each other on the circuit, seeing each other primarily in poster form. There are also so many promoters and djs and the like who I have gotten to know through the years but who I rarely get to spend much time with. I also have an old and dear friend from London who has moved to Toronto, so it gave me a good excuse to see her, and she offered me free lodging. So I went.

Well, Pete Seeger (that’s like saying Jesus in these circles), am I glad I went. I heard more incredible songs and stories than I think I’ve ever heard in such a short period, and definitely in such a small area. See the whole conference takes place in a big hotel, and in addition to the official shows in conference rooms or banquet halls, three floors of hotel rooms are occupied but what are known as guerilla showcases (guerilla, not gorilla). So from about 2pm until maybe 3am (with a few hour break in the middle), there is pretty much nonstop music going on in maybe 60 rooms. It would be totally absurd if it wasn’t so damn good. When we’re not playing, we’re pushing through the crowds in the halls, making room for upright basses and banjos to get by, and going to hear more and more music. 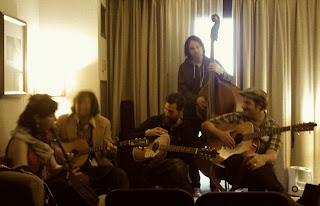 (Pictured from left to right are Nuala Kennedy, blurry A.J. Roach, Matt the Electrician and Nels Andrews in some hotel room on the 10th floor of the Delta Chelsea. I can’t remember the upright player’s name. Classic. Sorry. You were great, though.)

Again if I’m honest, there have been times in my life where it’s been hard for me to listen to other musicians (particularly of the male, guitar slinging variety–and most of them were at this conference). I think some of my peers may know what I mean when I say that at times being in the music business makes it harder to purely love music—a sad, sad thing when true, for of course it was a love a music that drew us into the realm in the first place. It’s a result of weak things–feeling threatened or envious, no doubt, or of doubting our own worth.

Well, blame it on the kind Canadian character, perhaps, or the unfamiliar moisture in the air blowing in from Lake Ontario, but I didn’t feel any of that this week. Maybe the music was just too damn good. Or maybe I’ve matured. Or maybe both. But all that petty bullshit wasn’t there.

The biggest compliment I can pay another artist or writer, I think, is that hearing her or his songs made me want to hurry home and write more songs, better songs. Or maybe the biggest compliment I can pay is that hearing his or her songs or poetry made me want to be a better person, to see the world through younger, fuller eyes, to hold my wife in my arms a little longer, to sing my boys to sleep a little sweeter. Or maybe these two concepts are the same. Or, if not the same, they’re at least linked at the hip. Being a better person and wanting to write a better song, that is. Maybe that’s the key. Maybe that’s why we write, for when we are better able to see and feel the beauty and sorrows in the world, the beauty and sorrows in each other, then we write better songs and, in turn, perhaps we make the world a little more beautiful. It bursts forth. It has to burst forth.

I am still flying home over America, by the way, and now out my window it’s happening. The Earth is changing. I can see the last line of farms, and I can see the uneven red cut of the desert clawing into that last line of farms. It literally cuts into them. Reaching for them. Claiming them. And that’s pretty much it for the green until California. But I’m getting off in New Mexico, so that’s it for me. And that vanishing is always a shock to the system, no matter how many times you see it. Sometimes it’s sad and hard. Sometimes it seems wrong. Makes you panic even. Like you’re leaving home, not heading toward it. Like you better have your supplies with you, for this is no land for the weak of heart.

But today I don’t feel that way. I’m excited about where I’m going. And that’s due, in a large part, to where I’ve been (yes, yes, course it’s still mainly because of Sarah and my two muffins (metaphoric muffins) waiting for me when I get home, but I’m trying to write a blog here). I’m feeling lucky that music is what I do, and that I get to be part, even if just a distant cousin, of a family that includes the poets I was with this weekend.

Well, hell, now the ground is all cracked and cut up. It looks like nothing could live or grow down there. But in my mind, from way up here in the sky, it feels different. There’s so much music in my head right now. By Tanya Davis and Anna Vogelzang and Nels Andrews and A.J. Roach and Nuala Kennedy and Raina Rose and Dave Francey and Matt the Electrician and Mellissa Ferrick and Natalia Zuckerman and Mo Kenney and Robbie Hecht and Steve Poltz and Tony Furtado and Angel Snow and the Milk Carton Kids and Fraser Anderson and Jont and Amy Speace and Anna Egge and Devon Sproule and Anais Mitchell and Caitlin Canty and Rebecca Loebe and Ellis and Korby Lenker and RJ Cowdery and C.R. Avery and Ronny Cox. Search for them. Go on.

All of their music (and of probably 10 others I’m forgetting to mention) reminded me of why I love music so much, why I love writing songs. And it’s even making me see this desert floor differently right now, like maybe there’s actually some cool and clear river snaking through it now, just out of view, or like there are actually delicate daisies spreading all across it (they’re visible if you look long enough), or that maybe these clouds casting those dancing shadows on the land…maybe they could actually hold me…and I bet if they can hold me, they can hold you too. 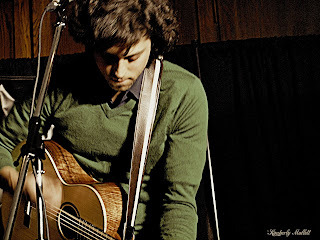 (photo taken by Kimberly Mallett of my new guitar at the Folk Alliance.)